geology and history of antarctic region

The geology of Antarctica can be difficult to study because so much of it is under thick ice sheets.  Despite the ice, scientists have pieced together much of Antarctica’s history and geology using radar and other methods. Recently, there have been several new discoveries, including new valleys and volcanoes. 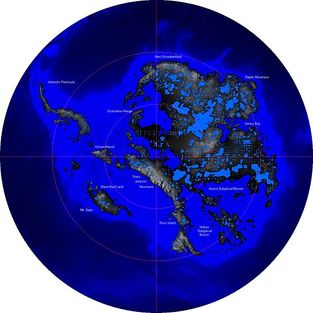 Antarctica looks a bit different without the ice covering it! Some of this data is hypothetical--new maps of Antarctica's surface are still being created. 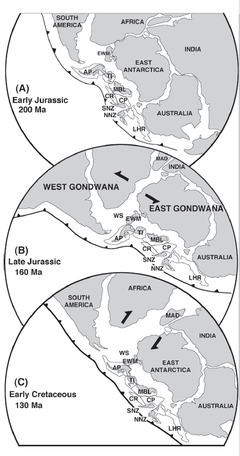 Antarctica was part of the supercontinent Gondwana until it started to break up in the Mesozoic, possibly due to plume related magmatism (Fitzgerald et al., 2002). While part of Gondwana, what is now eastern Antarctica fit between Africa, India and Australia. Western Antarctica was a group of microplates more or less extending from the tip of South America, which is why western Antarctica as well as the South Georgia islands are geologically very similar to the Andes (Dalziel et al., 1975; Fitzgerald et al., 2002). These areas are characterized by folded sedimentary or slightly metamorphosed rocks from the Mesozoic, as well as granites related to the rifting during the break up of Gondwana.


Sedimentary rocks from this area tell scientists about the climate during the time of deposition. During the Mesozoic, the earth’s climate was warmer than it is today and likely lacked ice caps. Temperatures in Antarctica got up to the mid 20’s in the summer, and down to -20 in the winter (Sellwood and Valdes, 2006), allowing for an abundance of plant and animal life to live on the continent. Dinosaurs lived in Antarctica during the middle and late Mesozoic, including everything from theropods in the early Jurassic (Smith et al., 2007) to hadrosaurs in the late Cretaceous (Case et al., 2000). 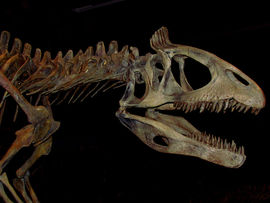 A cast of a cryolophosaurus skeleton, an early Jurassic theropod from Antarctica. (From a display in the Royal Ontario Museum)

By the Cretaceous, Antarctica had split entirely from Gondwana and moved further south. The Weddell sea, now at 75-80°S, was already at 65°S in the late Cretaceous (Brentnall et al., 2005). There were still evergreen forests present, and warm summers, although due to the move southward sunlight became more seasonal. Igneous and metamorphic rocks from the Cretaceous are generally associated with extensional fault zones (Fitzgerald et al., 2002). The Kerguelen plateau also formed during the Cretaceous, associated with a hotspot-mantle plume event (Duncan, 2001).

About 50 million years ago, during the Paleogene, the Antarctic region separated entirely from South America as the Drake Passage opened. At this point, the spreading rate between South America and Antarctica (as the Scotia Sea plate was being created) increased dramatically. Small basins would have formed first, and by 30 million years ago the Drake Passage had deep water flowing through it. These currents completely thermally isolated Antarctica and allowed for the creation of the ice sheets that cover Antarctica today (Livermore et al., 2005).
This area is home to several smaller plates, including the Scotia, Shetland, and South Sandwich plates. This area has a strong history of tectonic activity, with several active and extinct spreading and subduction zones.

Antarctica has undergone a complex geologic history which scientists are still trying to unravel. Although Antarctica can be difficult to study, the results are often worth it. Despite the ice making study of the continent difficult, it actually makes studying  meteorites easier, as the dark rocks are easy to see against the white ice and snow. 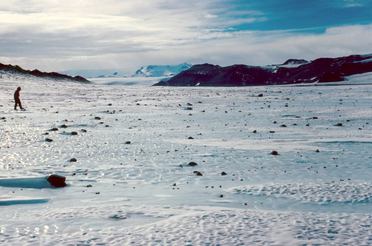 Rocks, including meteorites, are visible in this photograph of Lewis Cliff, Antarctica.
Image copyright Washington University in Saint Louis (WUStL)

As the ice sheet moves, meteorites and other rocks accumulate near obstacles, where strong winds keep them from being covered by snow. Geologists from the WUStL estimate that about 1 in 500-1000 of these rocks are meteorites, which is a much higher ratio than elsewhere on Earth.
The Antarctic Meteorite Program is an organization in the United States trying to catalogue and collect many of these meteorites.
Page by Isabel Fendley

Download File
Fitzgerald, P., 2002. Tectonics and Landscape Evolution of the Antarctic Plate since the Breakup of Gondwana, with an Emphasis on the West Antarctic Rift System and the Transantarctic Mountains. Royal Society of New Zealand Bulletin, 35, 453-69.