The Scotia sea plate (SCO) is an almost entirely submerged plate underneath the Scotia Sea, near Antarctica.

There is no associated continent with the Scotia plate. Most of the plate is under up to a kilometre of water, except for the tip of South America on its western side and the South Georgia islands in the north eastern corner.

Formation of the Plate

The Scotia plate formed in the mid-Eocene, approximately 50-35 million years ago, when the Drake passage opened separating South America and Antarctica (Livermore et al., 2005) and creating the Scotia plate between them. Once they had separated enough for deep water currents to traverse the passage, Antarctica became thermally isolated, possibly causing the Eocene-Oligocene climate change and extinction event (Livermore et al., 2005). 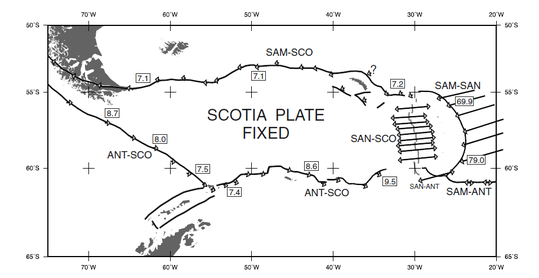 The two longest boundaries—those with the Antarctic and South American plates—are both sinistral strike-slip boundaries (Thomas et al., 2003). The southern border with the Antarctic plate, known as the South Scotia Ridge, moves with a rate of 7.5-9.5 mm/yr. The northern boundary with the South American plate, known as the North Scotia Ridge, is also tectonically active, moving at a rate of approximately 7 mm/yr (Thomas et al.,2003).

In the west, the Shackleton Fracture Zone forms the boundary between the Antarctic and Scotia plates in the Drake Passage. It is a left lateral transform boundary with movement of 7.5-9mm/yr (Thomas et al., 2003) near the former spreading centre of West Scotia Ridge. The Shackleton Fracture Zone has been active since approximately 29 million years ago (Galindo-Zaldivar et al., 2000), the same time as the formation of the plate.

The southern Chile Trench, caused by the subduction of the South American plate, also forms part of the western border.

The eastern edge of the Scotia plate is the East Scotia Ridge, a divergent boundary which is spreading at a rate of 60 mm/yr in the northern part of the East Scotia Ridge to 70 mm/yr in the southern portion. This spreading ridge is part of a back arc formation caused by the subduction in the South Sandwich Trench (SST) of the South American plate under the Sandwich plate.

Geology of the South Georgia Islands 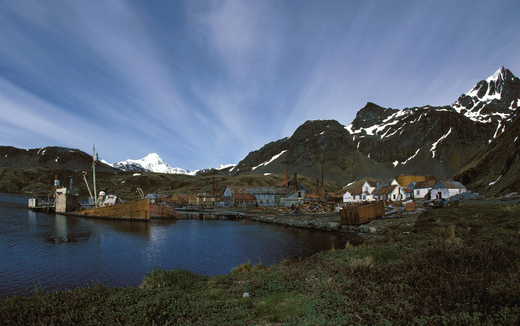 The South Georgia Islands are property of the United Kingdom. Their economy depends nearly entirely on fishing and tourism.

The South Georgia islands are the only part of the Scotia plate not underwater. They are mostly made up of tightly folded sedimentary rocks that are in some cases partially metamorphosed. These sedimentary rocks are the same as those that form the southern tip of South America and parts of the Andes mountains, indicating that they were connected and formed as part of the same formation (Dalziel et al., 1975). There are also intrusive dioritic igneous rocks present in the southeastern end of the island.